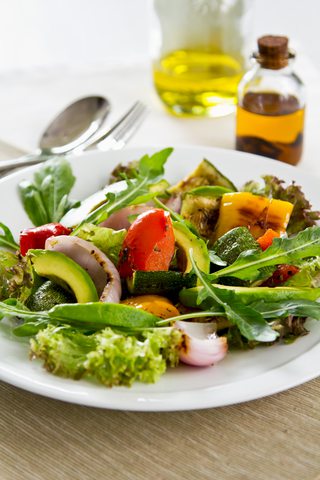 California is known for its amazing food, earmarked by a tradition of fruit, fresh leafy salads, fresh flavors, and organic dishes. There is however plenty of variety in Californian cooking, including fusion cuisine with fresh local ingredients. An attractive presentation is important in authentic California cuisine.

Californians enjoy cooking with lean meats and seafood, fresh fruit and veggies, and anything low in saturated fat and high in nutrition. Japanese, Chinese, Italian, French, and Mexican cuisines have all influenced the fusion cuisine of California.

Alice Waters has contributed to authentic California cuisine a lot. She opened Chez Panisse restaurant in 1971 in Berkeley, CA, and Wolfgang Puck is another name associated with this style of cooking. Daniel Patterson is another name you might know, and he has emphasized foraged foods and vegetables, keeping the traditional emphasis on presentation, along with using locally sourced ingredients. 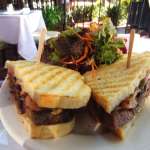 California pizza is an unusual part of authentic California cuisine too. You will find plenty of non-traditional toppings like fruit-smoked bacon, lettuce and gourmet mayo for a Californian take on a bacon cheeseburger. Or a Thai chicken pizza which has peanut sauce instead of tomato sauce. Crab, shrimp, beansprouts, crushed nuts, and avocado are also prized as California pizza toppings, although not all on the same pizza of course!

California salad recipes have a place in many Californian hearts, and you will find Chinese chicken salad on many restaurant menus. This is made with chicken salad with small wonton wrappers. The ginger dressing is a Californian creation inspired by Chinese cooking, and it’s a beloved part of authentic California cuisine.

As well as being famed for its healthy, colorful and delicious food, California is known for everything from the gold rush to pioneers. It is bordered by Baja, Arizona, Nevada, Oregon, and the Pacific Ocean. This state is one of the US’s major agricultural centers, producing abundant fruit and veggies.

At least 25% of California’s farm income is from nuts and fruit, while another 25% comes from vegetables and fruit. California is known for producing peaches, oranges, nectarines, grapes, and avocados, as well as walnuts, pistachios and walnuts. Organic food is also very popular.

A lot of the focus on authentic California cuisine is aimed at quality and nutrition rather than flavor, cost or anything else. A lot of people enjoy this lighter take on American food although some people prefer heavier, battered or deep-fried food to California’s lighter options. 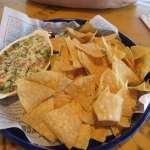 Baja-style and Tex-Mex cuisine plays a big role in old-fashioned California cuisine, and Mexican style food is a way of life in California, especially since there is a dense Mexican population there – just over a third of the residents in fact. A good chef can put a south of the border twist on just about anything.

Some Californian restaurants offer ‘classic Californian cuisine’ such as The California Pizza Kitchen which has more than 180 venues all over the world including in Shanghai, China. This restaurant specializes in authentic ‘California style’ dishes including pizza and all kinds of California salad recipes. Their pizzas are made in an open-flame pizza oven. Want to make some authentic California cuisine recipes yourself? 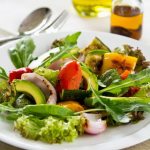 This salad boasts asparagus, eggplant, peppers, artichoke, chicken, corn, avocado, and a tangy balsamic-mustard dressing. This is simple to prepare, nutritious, and the flavor is simply fantastic.

Asian food is a big influence in authentic California cuisine. This famous type of sushi includes avocado and imitation crab, and the flavor is simply gorgeous.

Peel an avocado and cut it into strips. Tear ¾ cup (100g) of imitation crab into a bowl, then add 2 tablespoons of mayo and ½ teaspoon of salt.

Cover a bamboo rolling mat with plastic wrap then put a sheet of nori (dried seaweed) on there.

Spread 1½ cups (240g) of prepared sushi rice over there, then sprinkle on some white sesame seeds. Flip over the sushi then put the avocado and crab on top.

Now roll the mat forwards, pressing the ingredients inside the sushi. Remove the mat. Repeat 3 more times so you end up with 4 rolls. Wipe a sharp knife with a damp cloth then cut each roll into bite-size pieces. 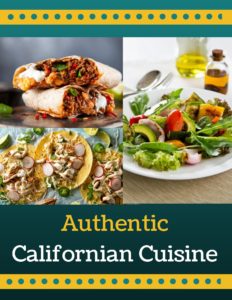 This has to be one of the tastiest chicken recipes and it is a fine example of authentic California cuisine. Preheat the oven to 350 degrees F (175 degrees C).

Warm a teaspoon of olive oil in a skillet then add 4 skinless, boneless chicken breasts and ½ teaspoon onion powder. Cook for about 15 minutes or until the chicken is done, then add a pinch each salt and black pepper.

After that, bake for 12 minutes or until the cheese melts. Finally, take the chicken out of the oven and top with a couple of avocado slices before serving.