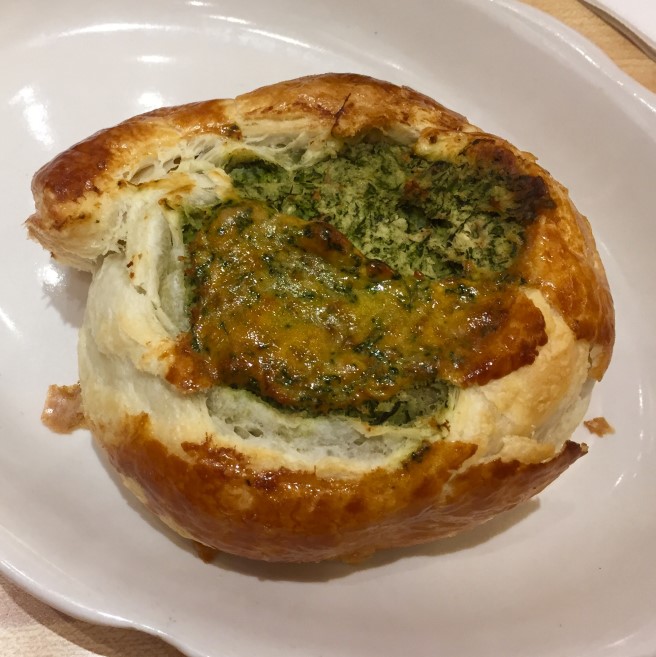 I first tried spinach potato knishes (pronounced kuh-NISH-es) at Kenny and Ziggy’s in Houston TX, and wow was this some spectacular comfort food. I’m British so I am used to Cornish pasties (a tasty pastry-enclosed meat and potato recipe from the southwest corner of England) and I also enjoy pastry-wrapped or pastry-enclosed vegetable recipes for lunch or as snacks.

What are knishes, I asked myself, perusing the menu. Google to the rescue and I read the description. My mouth began to water and I thought wow I have to order this Jewish comfort food stat!

What is a Knish?

So, now you’re asking what are knishes exactly? Well this tasty Jewish recipe is a savory pie. Knishes can be filled with potatoes, meat, sauerkraut, kasha, cheese, onions, spinach or a combination of these. Knishes may be baked, grilled or fried. The flavor remains similar but the spinach potato knishes texture varies depending on the cooking method employed.

Spinach potato knishes, which like the others are vegetarian knishes, can be compared to other pastry appetizers or baked dumpling type dishes, such as empanadas from Mexico, pasties from the UK, calzone from Italy or pirozhki from Russia. You can also compare the format and flavor to Jamaican patties, southeast Asian curry puffs, South and Central Asian samosas, Middle Eastern fatayers and Portuguese rissoles.

This delicacy was made popular by Eastern European immigrants in the US, primarily modern-day Poland, Belarus, Ukraine and Lithuania. You can get them from street vendors wherever there is a big Jewish population, perhaps from butcher’s shops or from hot dog stands.

Spinach potato knishes might be somewhat new but they are my favorite variety. If you’re into spinach, you might also like this spanakopita recipe which is a Greek pie made with spinach and cheese. Another idea is this creamy spinach soup recipe.

What are the Different Types of Knishes?

They can be square, round or rectangular in shape, and some of the filling might be exposed or the filling might be totally enclosed. You can also find knish recipes in all sizes from single bite-sized ones to canapé size or even sandwich size or (well, yes this is Texas after all!) sharing size.

Knishes were introduced into the US around 1900, and ‘knish’ is a Yiddish word that comes from knysz (Polish) and knysh (Ukranian). The first baker making these in the US baked them in 1910 in New York.

Like a lot of dishes, knish went in and out of popularity. However it’s fair to say there has been new knish interest sparked in the last few years, largely thanks to specialty restaurants like My Mother’s Knish in Westlake Village, CA, Buffalo and Bergen, Washington DC, and the Knish Shop in Baltimore, MD.

You can use baby spinach or regular chopped spinach with the potato mixture in knishes since it’s cooked anyway. So either make your way to your closest Jewish deli or make this wonderful recipe in your own kitchen.

What are potato knishes made of?

There are various recipes. Personally I love to add potatoes and baby spinach to mine, but other filling options include kasha, meat, onions, cheese, or sauerkraut. You could compare these little snacks to British pasties, Spanish empanadas, Italian calzones, or Russian pirozhki.

What goes with potato knishes?

Although you can add some horseradish, brown mustard or sour cream if having potato knishes as a snack, they also make a nice side dish with meatloaf or a salad. What are some other foods that go with potato knishes? Well, anything you want, really! Try them with chicken noodle soup.

What is the history of the knish?

Knish recipes hail from Eastern Europe and Jewish immigrants introduced them to the US back in the early 1900s. New York’s Lower East Side was home to some of the first knishes enjoyed in the United States. And these days they’re everywhere – who can resist a warm, delicious, golden brown potato spinach knish?

What is the difference between a pierogi and a knish?

They are certainly very similar. But then they are also different. Pierogis are boiled or fried in a large skillet over a medium heat and for this reason has a dumpling-like texture. A knish is baked in the oven on a baking sheet so will have a crisp pastry shell.

What are the ingredients in Spinach potato knishes?

Recipes differ of course. But this one calls for flour, oil, vinegar, seltzer water, and salt and pepper for the dough. The filling is a delicious mixture of potatoes, spinach, oil, salt, pepper, garlic, and cream.

How many calories are in a serving?

Recipes vary but this one is about 400 calories a serving. And there are around 45g carbs per knish.

Where can I buy potato knishes?

You can get them from any Jewish deli or grocery store, a Jewish restaurant, or why not try making the following recipe yourself? I promise they’re super-easy to prepare! 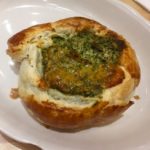 Spinach potato knishes are enclosed in pastry. Here we are pairing mashed potatoes with spinach to make the ultimate Jewish comfort food. Serve this for lunch or as a warm satisfying snack.

For the Knish Dough:

For the Knish Filling: