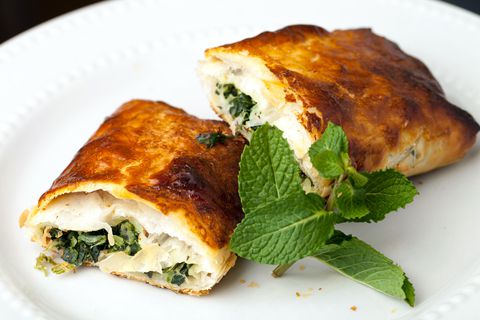 This amazing Greek dish is famed not only in Greece but anywhere in the world there are Greek people or Greek restaurants. I personally love Spanakopita Greek spinach pie and one slice is never enough! The joy of Spanakopita Greek spinach pie is that it is made with phyllo pastry. Adding melted butter between the pastry layers makes it really flaky and tasty. The filling is spinach, egg, 2 kinds of cheese, onion and parsley, and the flavor is simply amazing.

You can either make triangular servings or one large Spanakopita Greek spinach pie which is cut into slices. The method is the same but the large pie will take about twice the time to bake as the individual portions, so the choice is yours which to make. Although phyllo (also spelt filo) dough is more common, some recipes will tell you to make a flour and water crust instead which offers a heavier texture.

This type of dough is made in the Greek islands. Some recipes call for salty, white, fresh cheese to be used instead of the feta, and we usually add parmesan too, for a nice tangy contrast.

Enjoyed as a snack in Greece, Spanakopita Greek spinach pie is served direct from the oven or it can be served at room temperature. There is also a vegan version which is made without dairy and eaten during religious fasts like Lent. Some of these might include tofu as a replacement for the cheese. Leeks, sorrel or chard are sometimes combined with spinach in rural parts of Greece, to make the spinach go further. 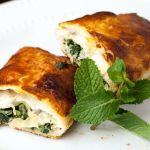 Spinach and feta cheese are the fillings in this delicious Greek snack which is made with phyllo pastry for a lovely flaky texture. Served hot or at room temperature, this snack is always tasty.