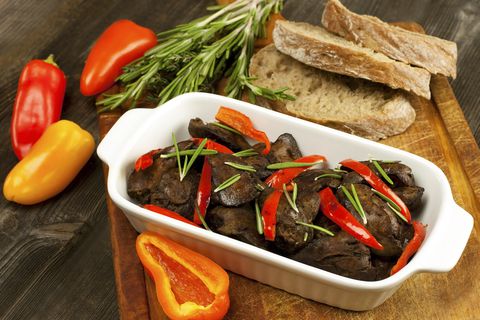 Chicken is one of the most popular meats worldwide, although many of us will gladly buy the breast or drumsticks but be hesitant about the livers. So, drum roll – enter chicken livers Middle Eastern style!

Once you know this recipe you will want to make it over and over!

When you try chicken livers, you are sure to change your mind because the flavor and texture are both very enjoyable. Also, these livers are really versatile.

You know, a Middle Eastern flavor works very nicely, but there are plenty of other cuisines using these livers. Each one adds its own flavors and take on flavors to complement the distinctive liver taste.

I like to keep the following chicken livers Middle Eastern recipe deliberately straightforward, because it will be the first time some of you have cooked chicken livers.

I really just want to show you how easy they are to prepare. In this recipe some vegetables are sautéed in a pan, then the livers and seasonings go in. Another few minutes and the dish is ready to serve, perhaps with rice or potatoes.

How easy is that? I hope your mouth is already watering. I can’t wait to hear how you found it! 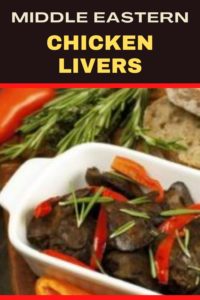 Something else to try is threading them raw on to skewers with bay leaves then grilling them until firm.

A little salt and black pepper would be the only seasonings needed for that.

I still prefer this chicken livers Middle Eastern style but go ahead and make whatever you wish.

Try pureeing cooked livers with a little olive oil and some herbs and spices (any you want) to make a tasty dip for melba toast.

Chopped cooked livers can always go into a bowl of homemade chicken noodle soup, risotto or a pasta dish.

Something else which is very appealing about these nutritious, tasty livers is their economical price!

You can use whatever color bell pepper you want.