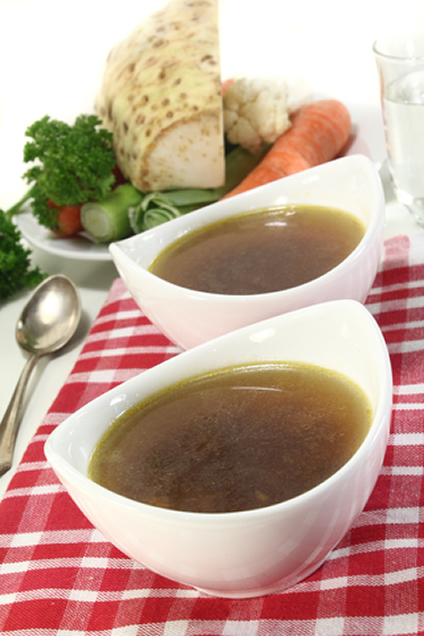 Beef bone broth can be homemade or purchased, but it’s pretty expensive from the store, which is why many home cooks want to know how to make bone broth themselves in their own kitchen. Another option to consider is concentrated bone broth, but again this isn’t cheap.

Also homemade is always more delicious: you can’t change my mind! So let’s take a closer look at one of the best of the bone broth recipes.

Beef broth, chicken broth and fish broth are believed to be a cure-all in lots of traditional households. According to many a grandmother and healer, the bones used to make broth are rich in nutrients and help to soothe sore throats, as well as build strong bones and teeth.

Bone Broth as a Soup Base

Broth can be eaten alone or used to make recipes like French onion soup. Such recipes are much nicer if you use homemade broth or consommé to make them.

It’s true that bone broths feature in all the traditional cuisines of the world. When animals are slaughtered locally, nothing goes to waste. The knuckles, carcasses, hooves, and bones can all be used to make a fine broth.

What about Bone Both Nutrition?

Science is in agreement with the grandmothers and healers, in that rich broths contain calcium, phosphorus, magnesium, sulfur, silicon and trace minerals. It contains broken down cartilage and tendon materials like glucosamine and certain sulfates to help with joint pain and arthritis.

The following recipe for a healthy beef bone broth is ideal if you want to eat something nutrient rich, as well as incredibly tasty. It is cooked slowly for between twelve and seventy two hours, so bear that in mind if you want to use it to make a French onion soup recipe – your onion soup isn’t going to be ready any time soon!

Beef Bone Broth in the Crockpot 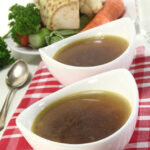 Cooking beef broth yourself is the best way to make it if you want to end up with a high quality broth which is really versatile. This recipe is wonderful.

What are the Best Bones for Bone Broth?

There is no restriction on which kind of bones you can use when making homemade bone broth. Any animal can be used to make bone broth, including beef, pork, turkey, lamb, chicken, buffalo, bison, venison, or fish.

Connective tissues and marrow found in parts of the animal’s body like hooves, feet, gizzards, fins, beaks or even fins, depending on the animal you’re using. The bones and connective tissue break down into the soup to give it flavor and nutrients.