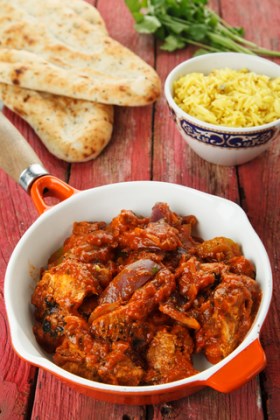 Indian cuisine is really popular in the UK, but British Indian food differs from authentic Indian cuisine. While some dishes are Anglicized versions of typical Indian dishes, others are Indian takes on typical British dishes, so there is plenty of fusion.

Fish and meat are cooked as curries with Indian vegetables, and yogurt, almonds and coconut are typical ingredients in this cuisine. British roast beef for example can be modified with chilies and cumin to make a curried beef dish.

Indian chutney is usually sweetened or cooked in British Indian recipes but not highly spiced. Major Grey’s Chutney is a good example, although spicy or sour fresh chutneys are not often seen. Piccalilli was an early attempt at an Indian condiment. 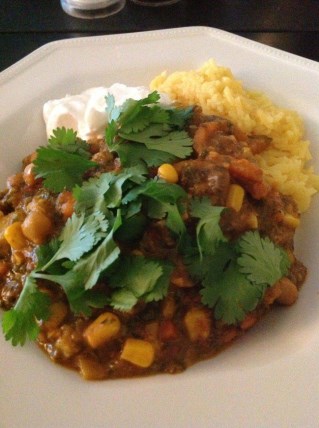 The First Indian Restaurants in the UK

Veeraswamy and Chutney Mary were a couple of the early restaurants in England serving this fare, although most Indian restaurants serve standard Indian dishes with are better known to British palates.

An Indian immigrant called Dean Mahomed opened the first curry house in the UK and their 1809 newspaper advert advertised “Indian dishes, in the highest perfection… unequalled to any curries ever made in England” to attract colonial returnees.

Bamboo-cane sofas and hookah pipes were provided at the Hindostanee Coffee House as well as various meat and veggie curries.

Go back a couple hundred years and curries were already becoming a popular part of British cuisine. Some coffee houses served curries as part of their menu and ladies freshly returned from the colonies would attempt to recreate the kind of meals they had enjoyed on the subcontinent.

The cookbook ‘The Art of Cookery’ by Hannah Glasse which was published in 1747 has recipes for pilaus and curries. Early recipes were mild and relied more heavily on herbs than spices. Salt, peppercorns, lemon juice, and coriander seeds were popular, but ginger, turmeric, fenugreek, cayenne, and cumin were also being used by the 1800s.

While food in Indian was often fried in fat or ghee, the British preferred other cooking methods. Take into account the spices used had been on a boat for six months so instead of a fresh, aromatic zing, the flavors would have been more subdued. This was one of the main differences between British Indian food and regular Indian food.

The spice trade at the time saw a variety of European powers setting up in India by colonizing or creating trading companies. Add this to the Mughal conquest and various new fusion dishes appeared such as vindaloo, a traditional Portuguese meat dish with Goan spices, or biryani with Persian ingredients.

Indians have separate names for their dishes, so while they would call something a dopiaza or korma, the British would often use the catch-all term ‘curry’ for anything made with Indian spices. Some people think the word comes from the French ‘cuire’ which means to cook, while others believe it comes from ‘kari’ which is the Tamil word for sauce. 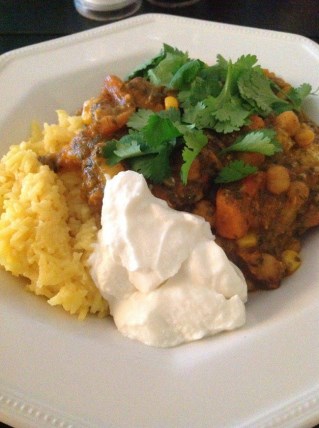 In the 1800s British living in India would enjoy curried dishes for every meal, but after being open for just 3 months the Hindostanee restaurant in London was not enjoying the success its proprietor Mr Mahomed believed it would. He filed for bankruptcy.

People did not often eat out during that era. They would cook at home or have their own chef cook in their home. The restaurant was still there until 1833 but with a different owner.

In the 1800s Queen Victoria (also the Empress of India) had Indian staff to prepare British Indian food on a daily basis, thus increasing its popularity further among the middle classes. She also build an Indian themed state room decorated by a famous Punjab architect.

Curry continued to become more and more popular until 1857 when Indian solders were rebelling against British rule in India. British Indian food then went out of vogue.

It was popular again by the 1870s when PM Disraeli chose to make India the brightest jewel in the British crown and involve it more in politics.

Despite this, the British at the time were losing interest in Indian food and discovering the joys of French cuisine. Many were replacing their Indian chefs with French ones.

Curries were not that popular at the start of the 1900s, largely because a house smelling of curry was an unappealing prospect. Red meat, potatoes and homegrown veggies like cabbage were the dominant ingredients in the British diet.

At the same time though Indian sailors were dumped at London, Cardiff and other major ports and some jumped ship. Many of them came from Sylhet which is now an area in Bangladesh, and they opened cafes for other Asians to eat at.

They tweaked the recipes to suit the Westernized palate and gained British fans too, buying bombed-out cafes and fish and chip shops in the 1940s, where they would sell fish and chips, pies and chips, and also curry and rice. British Indian food had entered a new era.

These cafes stayed open late to attract people in after the pubs would close. The late night aroma of British Indian food would be too tempting to pass up. Many Bangladeshis entered Britain in the 1970s, most heading for the East End area of London.

A lot of them bought or worked in restaurants, cafes and chip shops, and a lot of them, or their descendants, are still there today dominating the British Indian food industry. Today about 70% of the Indian restaurants are owned by Bangladeshis.

Foreign secretary Robin Cook once described chicken tikka masala as a ‘true British national dish’ and you can find Indian restaurants in every town and city, and find Indian ingredients and frozen Indian meals at any grocery store in the UK.

The British envision the glamor of the Raj and also find these dishes familiar and tasty, so it is fair to say the British love affair with Indian food is not going to end any time soon. Head into any fish and chip shop and you will see ‘curry sauce’ as a topping option for your chips. 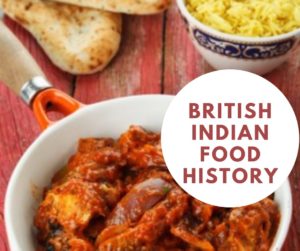 This is one of the most iconic Indian recipes in Britain and British Indian food at its best. Chicken tikka makes a great baked potato or sandwich filling, or you can add the masala sauce to serve it in curry format. This dish is chicken chunks which are marinated in yogurt and spices before being baked in a tandoor oven then served in a masala sauce.

A coriander and tomato sauce is common but there is actually not a set recipe. There are nearly 50 different ways to make the dish with chicken being the only standard ingredient in each one!

Tomatoes (usually pureed) along with spices and coconut are usually used, and paprika powder, tomato concentrate and turmeric might also be in there. Lamb, fish or paneer (a kind of Indian cheese) might be used instead of the chicken.

It is not know how this British Indian food dish originated. Perhaps it was first created in an Indian restaurant in London. Chicken tikka has always been prepared in India but the masala sauce might have came about because the British like some kind of ‘gravy’ on their meat. Chinese stir-fry is the most popular foreign recipe in the UK but chicken tikka masala is the second most popular. 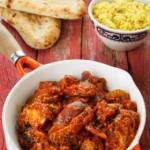 Chicken tikka masala is the second most popular foreign dish in the UK, and comprises spiced chicken in a delicious tomato-based sauce. It is easy to rustle up this tasty British Indian food dish yourself at home.