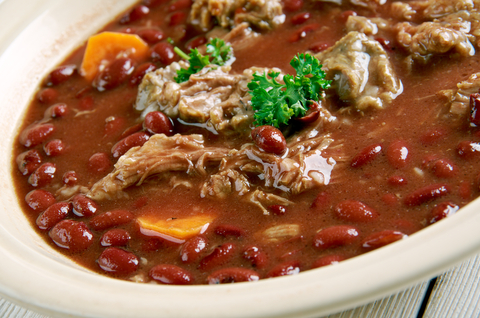 Brown Windsor soup is thought to have originated in the Victorian and Edwardian eras although the exact date is unclear. Anybody who happened to be at sea during the 1950s and 1960s on a British Merchant vessel will have enjoyed this soup on board.

There were various soups served on the ships, creatively named by whoever happened to be doing the cooking. But Queen Victoria’s Brown Windsor soup recipe would have stood out for its unique flavor.

The ingredients in this soup vary but the main ingredients, namely the beef, lamb and meaty stock, make it a rich, hearty dish. If you think soup cannot be filling, try this recipe and you will see that it can. The original recipe was made with calf’s feet but you don’t need to add those!

This tasty English soup makes a warming lunch or you could serve it for dinner with bread rolls on the side. If you want to serve it as an appetizer or starter recipe, then it will serve 8 instead of 4 people. Follow up with poultry or seafood as your main dish. 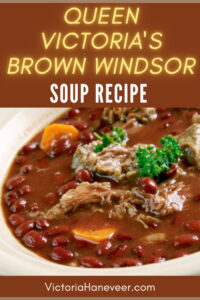 How to Make Brown Windsor Soup

Let the Royal Windsor soup cook slowly on the hob for a couple of hours, then serve hot. Actually it wasn’t known as brown Windsor soup until the 1920s or maybe even later, when it was a dubious looking brown soup made with uncertain ingredients rather than something named after royalty.

Although it is traditional to stir a tablespoon of Madeira into each portion of soup before serving, this is optional. The Madeira does go well with the beef stock though. French onion soup is often based on beef stock and has Madeira or sherry stirred into it, and the concept is similar here. Make this flavorful soup and enjoy a true taste of English history in every mouthful. 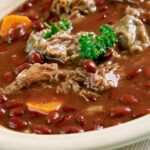 In this recipe, meat, vegetables and beef stock combine with bouquet garni, chili and perhaps a splash of madeira wine to make this classic, rich Edwardian/Victorian soup recipe.

Enjoy a taste of historic England by making this Windsor soup recipe. This is rich and meaty and it makes a filling lunch or dinner. You could even serve it as a starter but keep the portions small because it tends to be filling.

This is a nice, meaty treat. You can use mutton or lamb in here. Mutton is old lamb. If you cook it slowly it can be just as tender as lamb, but it does tend to be stronger in flavor, so if this is not your favorite meat you might want to use regular lamb instead of mutton, or else just use beef instead.