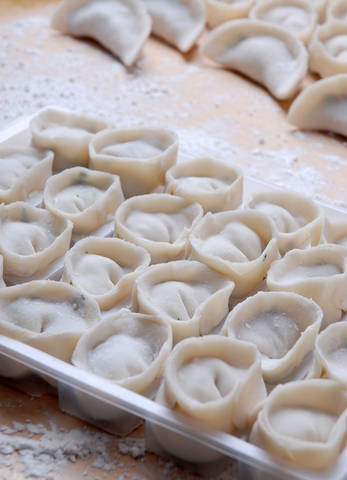 Folding wontons is something you should learn more about if you’re interested in preparing this delicious Chinese snack yourself. There are different ways of folding wontons, some of which are simpler than others.

Sichuan wontons, for example, are known as ‘chao shou’ which means crossed hands, and they have a thick-ish, white wrapping. These wontons are boiled and served in a highly spicy sauce which is typical of nearly all Sichuan cuisine.

The name is believed to refer to its wrapping style. The wonton wrapper is first folded into a triangular shape and then the two sides are brought to the front and they overlap. This looks a bit like someone with folded arms and it’s all in the folding wontons technique.

In Shanghai the wontons are folded into triangles but the second fold features a little twist, giving it a cute shape. Cantonese wontons are made by bringing the four corners of the wonton together and squeezing the wonton closed.

The Cantonese ones first appeared as hawker street foods and this wrapping style was the fastest one which is why it was used to make longs of wontons in a short time.

So what about fried wontons and the shapes of those? Well they are not part of authentic Chinese cuisine but we sure do love them over here and you can use the same folding techniques which will enclose the ingredients and not let anything fall out.

Wontons are traditionally boiled and then served in broth or on a plate. Wonton soup is another name for this dish. But fried wontons are really good and, although they are American-Chinese fusion, they are too yummy not to include here. Learn more about folding wontons and you will be able to make them like a pro.