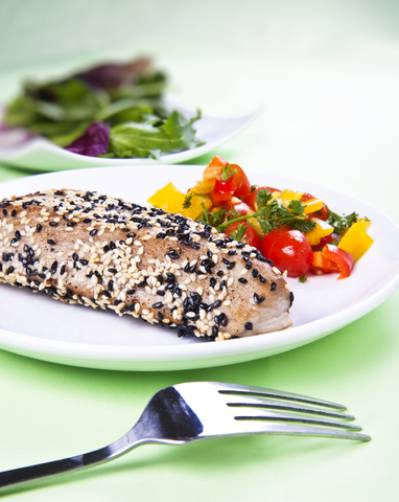 Sesame is a flowering plant and it is naturalized and cultivated for its edible seeds. Sesame seeds are believed to be the oldest oilseed crop and has been domesticated for more than 5000 years. The plant is drought-tolerant, making it a ‘survivor crop’ – capable of growing where most other crops would fail.

In 2010, more than 3.84 million metric tons of these seeds were harvested in the world, the largest producer of which was Myanmar. India exported the most and Japan was the biggest importer.

Sesame has one of the highest oil contents of any seed. This rich, nutty-tasting ingredient is used in many different cuisines, although it triggers an allergy in some people, like other nuts and seeds.

The seeds are cleaned and hulled after harvesting, then they are passed through an electric sorting machine which rejects any discolored ones. This is because seeds which all look the same color are believed to be higher quality by consumers. Off-sized or immature seeds are removed but saved for making sesame oil.

Ideas for How to Use Sesame Seeds

I love to toast mine and sprinkle them over Asian stir-fries. To do this, use a dry (no fat added) skillet and add the sesame seeds. Then keep the heat low and toast them, tossing/shaking them occasionally. When they are fragrant and slightly golden, they are done! You can also use them to make sesame cookies and cakes, and in other recipes where you want to add a nice crunch.

You don’t need a lot of them if you just want to add a hint of flavor. For example, if I’m making chicken teriyaki I will just sprinkle a few sesame seeds over it. Sometimes, like with this sesame crusted tuna recipe, you will want to use a lot though! Other recipes to try include these sesame wontons and how about this gorgeous Japanese salad with sesame dressing?