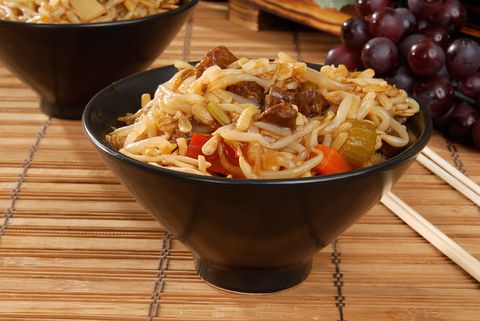 Beef is not as versatile as pork, for example they are not good for making a beef version of pork meatballs, which is why beef is not so popular. You will not find beef in Chinese cuisine if you’re looking at meatballs or similar. Beef can be eaten rare though, unlike pork, so you can cook it to rare if you prefer. This is not usually done in China though. The Chinese often pick sirloin or tenderloin for beef stir-fry recipes.

For a stew they will choose shank or shin in big cubes. They do not go for other pieces of meat because the longer tissues toughen more while stewing. Beef cubes or shreds should be marinated or well-dried before going into a hot wok, so the meat pores seal and the beef stays juicy.

Why not make a vegetable stir-fry, adding some beef at the last minute. This is a great way to use beef in Chinese cuisine. If you are using a tougher cut of beef, you will either need to braise it first, cook it separately, or slice it wafer thin before adding it.

Try adding Chinese mushrooms for a lovely earthy flavor, pineapple for sweetness, and matchstick-cut carrots and celery for crunch. Any kind of sauce would be nice with such a dish, especially oyster sauce or garlic sauce.

Occasionally you will have to modify some of the other ingredients. For example, if the recipe calls for light soy sauce for a chicken dish but you are using beef instead, a dark soy sauce will probably complement the beef more. Try some new ideas for beef in Chinese cuisine and you can enjoy the richness of both the meat and the authentic Chinese flavors.