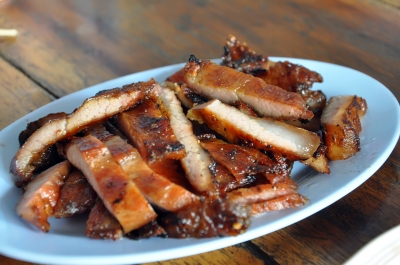 Chinese roast pork, roast belly of pork, BBQ spare ribs, pork meatballs, sweet and sour pork… these are just some of the famous Chinese recipes with pork we know and love in the West. Once you grind or mince the pork, you can use it to make a pork wontons recipe, but pork is often chopped or shredded or even served whole in other classic Chinese dishes.

Because pork is so common in China, the Chinese word for pork (‘yuk’ in Cantonese or ‘rou’ in Mandarin) is meat. Different recipes require different cuts of pork, depending on the cooking method and other ingredients in the dish.

So let’s take a closer look at Chinese recipes with pork. One popular Chinese pork recipe is red-cooked meat. This name comes from the fact that the soy sauce gives the pork a reddish hue.

Use fresh bacon, fresh ham or fresh pork shoulder for a red-cooked meat recipe and leave the skin on. Many Chinese believe the skin is the yummiest part of the meat.

Although fresh ham or shoulder or pork is normally cooked whole, fresh bacon is usually cut into 1 or 2 inch cubes with skin on. Pork chop is not used to make red-cooked meat because the tissues of the meat are too long and tight for this type of cooking.

Salted or dried sea food and vegetables are also added to this recipe. 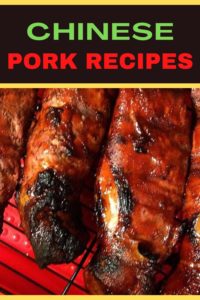 Sliced pork is often used in soup and stir-fries, and this meat will be leaner. Chinese recipes with pork often feature lean meat.

That is many peoples’ preference too unless you’re using something like belly pork which is nice deep-fried to crisp perfection.

Tenderloin, pork chop, fresh ham or the lean part of the pork shoulder is used for soups and stir-fries. The meat is sliced into very thin small squares so it cooks fast.

The pork might be shredded instead of chopped so it is better distributed with the vegetables in a dish. Steep the pork in seasoning and fry it before adding it to the other soup or stir-fry ingredients.