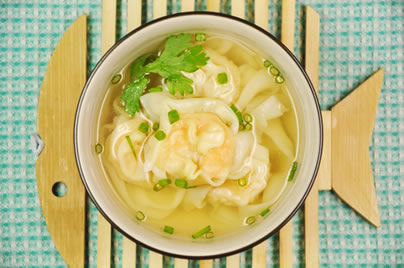 First of all, you will need to be creative but you also have a lot of leeway when it comes to choosing flavors and ingredients because you can use pretty much any kind of meat, poultry, fish, seafood or vegetables for making wonton soup. The broth itself should be clear but you can add garnishes or flavors to it.

Wontons would not work in a creamy soup, so keep the broth light and fresh-flavored for the best results. If you can make your own broth or bouillon that is always best. Store-bought broth can be alright but it is usually packed with chemicals and preservatives.

So the next time you roast meat, why not boil up the carcass or bones with some carrot, onion, garlic and parsley? This is one of the best ideas for wonton soup and starting with tasty broth never hurts!

Shrimp heads (especially the big ones) can also be boiled to make a nice fishy stock. Consider fish or seafood as one of your ideas for wonton soup if you usually stick to meat.

So anyway, let it cook for an hour or so then chill it, remove the fat which floats to the top and you will have a beautiful-tasting bouillon which cost just a few cents to make. This bouillon can be the perfect backdrop to any kind of wonton soup recipe, and you can mix and match the flavors, serving pork wontons in a shrimp-flavored broth or fish wontons in a chicken broth for example.

For the wonton filling, it is a good idea to combine ground meat, poultry or seafood with something like soy sauce or sesame oil to make it sticky, as well as finely chopped or minced vegetables and some kind of herb like cilantro or parsley. Green onion features in a lot of wonton recipes too.

The wonton filling should not be too sticky or wet, nor should it be powdery dry, so aim for something between the two. Keep the flavors simple too. A dash of sesame oil gives plenty of flavor. Most of flavor should come