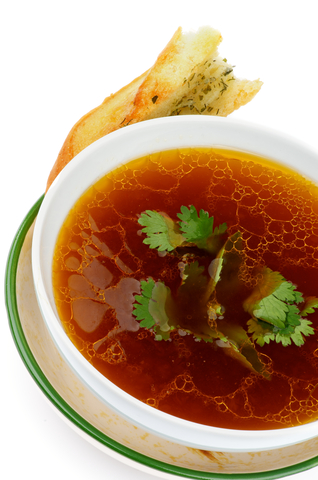 Bone broth recipes are well worth knowing. Bone broth is a slow-cooked soup made from animal bones which are filled with magnesium and calcium, along with collagen. This beverage is a great addition to any diet, especially if you have skin problems, immunity issues or digestive trouble, because it can help with those.

There has been a lot of talk lately about how to make bone broth recipes, with people wondering not only how to get the ingredients and make it, but also why it is so popular and what nutrients it includes.

Combined with apple cider vinegar (to coax the minerals out of the bones) and seasonings or vegetables, bones make a tasty, nutritious broth which will keep for about 4 days. It will also freeze, so why not make a big batch of bone broth recipes for the whole family? The meaty flavor is nice and this is a snack or drink that you can have anytime for extra energy. Oh, and bone broth recipes taste pretty good too!

Broths and stocks made from bones are given emphasis in Asia, and they are also prized in Europe for being the foundation of cooking. Keep a slow cooker full of bone broth on low (it will only cost a few cents a day to let it run) and you can ladle some into a pasta or rice dish, use it as the basis of a gravy or sauce, or simply help yourself to a cup of it whenever you want a healthy drink.

You are sure to love bone broth recipes, especially the homemade kind. Use bone broth to braise meats or veggies, or just use it whenever you need a savory liquid to add to cooking, or an energizing, nutritious drink.

Broth and Bone Broth vs. Stock

Broth is usually made with meat and might or might not include bones. Bone broth recipes include bones of course, hence the name, but you can make broth without. Broth simmers for about an hour and has a light flavor and thin texture. Stock is made primarily with bones which are usually roasted beforehand, and this gelatin-rich liquid is simmered for several hours.

Bone broth is made with bones and perhaps a little meat too, as you will know if you’re into bone broth recipes. The bones are usually roasted first, and this type of broth is often simmered for 24 hours or more.

This long cooking time is to release minerals from the bones as well as release gelatin and give the liquid a hearty flavor. Press the bones between your fingers at the end of the cooking time and they should disintegrate in some bone broth recipes.

A Look at Bone Broth Benefits

Everyone seems to be raving about bone broth recipes these days and that is mainly because of the nutrients it gives you. Bone broth is extremely rich in protein as well as other minerals, such as glycine which detoxes the body, supports digestion and, when paired with Vitamin C, supports healthy skin.

Gelatin is also found in bone broth and this supports digestive health. Bones usually cost less than a couple of dollars per pound and making a bone broth recipe is very easy.

You can drink bone broth as it is, add salt, pepper and crushed garlic to make a more flavorful beverage, or use it to braise meats and veggies, or improve sauces, stews, soups, pasta dishes, and risottos. All you need to make your own bone broth recipes is a slow cooker or a good stockpot along with something to strain the broth.

A reusable coffee filter or very fine-mesh strainer tends to get very good results. You will need the bones of beef, lamb, pork, poultry, fish, bison, or another animal, along with water and your preferred seasonings or flavors.

Bone broth recipes are great whether you are sick and have no appetite (because it’s a beverage) or whether you’re well and just want to stay well. It’s the ideal beverage for everybody. 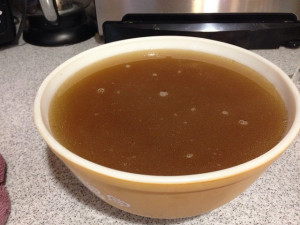 Keep homemade bone broth recipes refrigerated for up to a week, or freeze it in ice cube trays then transfer the cubes into a re-sealable freezer bag for up to 6 months.

You can pop a couple of cubes into a recipe to infuse the dish with nutrients along with the tasty, meaty flavor.

This mineral-rich infusion will find its way into all kinds of recipes whenever you want to add a pop of flavor and some extra minerals.

In fact, visit any 5-star restaurant and you will find a big pot of stock simmering away in the kitchen, which gets ladled into all kinds of dishes. Good restaurants in the catering industry are into bone broth recipes because they’re tasty, cheap and versatile. The longer bone broth recipes cook, and the more that goes into the mix, the better the flavor.

Bone broth is an excellent source of calcium, magnesium and phosphorus, so it’s great for your bones and teeth. It is also good for joints, hair, nails and skin because of its high collagen content. Some bone broth enthusiasts claim it supports smooth connective tissue thereby eliminating cellulite.

Where to Get Bones for Bone Broth Recipes

Whenever you cook an animal or animal parts, save the leftovers. This includes the carcass of a chicken, bones leftover from spare ribs, the Thanksgiving turkey, beef ribs, or anything else. You can also get them from your local butcher if he/she butchers whole animals. Local farmers raising grass-fed animals are another good source, or you can get them online sometimes.

I was wondering about bone broth for animals (bone broth for dogs and bone broth for cats) when I made by first batch since whenever I cook anything with meat my cat goes nuts. Anyway, to cut a long story short, she has urinary crystals if she doesn’t get enough hydration.

I’ve found a ladle of bone broth over her regular wet cat food (or at least the chunks of meat after she’s licked the gravy off and left the rest) encourages her to lap it all up. It’s all natural so I’d say go ahead. Meat is good for dogs and cats – they need it to be healthy.

Did you make bone both recipes too weak? No problem, just simmer it down on the stove until it reduces. The more it reduces the more intense the flavor will become. Have you been cooking it for ages and your bones are still hard? That’s OK, the nutrients will have released into the broth, so go ahead and sieve it through a fine-mesh sieve.

Don’t like the taste of bone broth recipes so much? Add some vegetables or meatballs or noodles or whatever else you like to add more flavor to the broth. You’re still getting all the bone broth nutrients, but with your favorite ingredients in there too.

Can I Leave Meat on Bones for Bone Broth?

This is fine (unless your husband is like mine and leaves no meat on his bones!!!) You are going to sieve it anyway. The exception to this would be if you cooked the meat is a strong-tasting sauce because the flavor of that will end up in the soup.

An example: if I’ve cooked Asian style ribs, for example, with an Asian marinade and/or sauce, I’d throw all the leftovers in the broth. Then, even if it ends up with traces of Asian flavor, you can use the bone broth as a base for Asian soup recipes.

How Long Should You Boil Bones for Broth?

Once you’ve brought the water and bones to a boil you should reduce the heat. Cover the pan. Then allow it to gently simmer for 10 hours at least or until it’s 1/2 or 1/3 reduced. As you’d expect, the more it can reduce, the stronger the flavor will get. Also, more collagen is extracted as time goes on. I usually give mine about 12 hours but the longer the better. You can always dilute it for drinking (or using in recipes) later.

Can You Cook Bone Broth Too Long?

Yes you can although it should be fine for 12 hours or even more. Just taste it periodically to see how the flavor is developing. If you do overcook it, the flavors of any vegetables you added can degrade and turn bitter or just give the soup a strange taste. Some vegetables can give a bitter flavor while overcooked in bone broth while others might go strangely sweet. Either way, avoid overcooking!

Why Do You Add Apple Cider Vinegar to Bone Broth?

Add some unpasteurized apple cider vinegar to the broth if you like. The low pH of the vinegar works like a solvent and pulls minerals including calcium out of the bones and into the broth.

What Should You NOT Put in Bone Broth?

Although it’s fine to use veggie scraps it’s best not to use cruciferous/brassica veggies. The reason is these can give a bitter flavor accent to the broth. Also, don’t add salt. If you’re going to use the broth for stews, sauces, soups, and so on, the salt concentration might get too high. 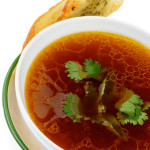 Few foods promise the nutrients and minerals that bone broth offers, and this soup not only offers benefits to your health but it also tastes pretty good, and anyone can make it.