Once you know how to make the best cheesesteak Philly style with the best Philly cheesesteak meat, you will want to make this mouthwatering treat again and again! There is something so magical about the combination of beef and cheese.

It works in cheeseburgers, it works in salads, it works in a lot of Tex Mex dishes. And it works even if you’re looking for keto Philly cheesesteak recipes because you can use a low carb bun. You can even make a cheesesteak soup recipe with these ingredients.

Because the steak and cheese are the main ingredients used when making Philly cheesesteak, you’ll want to make sure you pick out the best ones. Thin-sliced ribeye steak is a great meat to use in this recipe, since its fat content makes it tender and easy to bite through.

So long as you cut the beef thinly, you can use sirloin (strip steak) or a similar cut instead. Petite sirloin doesn’t cost the Earth and works beautifully in Philly cheesesteak sandwiches.

As for the cheese, use sliced provolone, white American or anything that isn’t too sharp, so it doesn’t overpower the meat flavor. The cheese offers a creamy touch so pick whatever you personally like.

Mayonnaise makes a tasty dressing or you could mix a little horseradish into the mayo if you want a kick! Onions and bell peppers are common in Philly cheesesteak recipes, while some people like to add mushrooms as well.

This delicious sandwich was created when a hot dog stand owner in Philadelphia, Pennsylvania, called Pat Olivieri, was tired of hot dogs for lunch. He got some beef from a nearby butcher, threw it on the grill and then enjoyed it in a hot dog bun.

So anyway, according to the story, a taxi driver drove past and smelled the enticing aroma, then ordered one for himself. Soon after that everyone wanted Philly cheesesteak sandwiches!

Make sure you don’t overcook the steak. This is one of the key components in the dish and it has to boast a melt-in-the-mouth texture! Cut it so thinly you can sauté it fast. A mandolin slicer will get it nice and thin, or you can ask your local butcher to slice it for you.

If you don’t want to spend too much on this, you can put a chuck roast in a slow cooker. Add a cup of beef broth, some salt and pepper and maybe a splash of Worcestershire sauce. Cook it on low for 7 hours (ish) and add in any vegetables 45 minutes before serving. Simply spoon this mixture on to your roll then top it with cheese.

Can you make a Philly cheesesteak without beef? Well, of course, if you’re the one in charge of cooking. You can use chicken instead. In fact many cheesesteak restaurants in Philadelphia offer chicken as an alternative to beef. It also goes beautifully with cheese. Ensure you slice the chicken thinly against the grain, so the texture is similar.

Making Philly Cheesesteak: What Else to Add

Some people like to add lettuce, tomato and raw onion on top of the cheesy steak mixture, while others prefer to keep it simple. However you serve your cheesesteak Philly style is totally your call. You add what you want and omit what you don’t! You might prefer to serve a simple salad on the side rather than adding veggies to the sandwich itself. 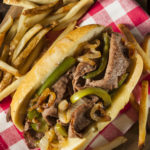 This delicious steak and cheese sandwich, known fondly as Philly cheesesteak, makes a wonderful meal. Served with fries or onion rings, a cheesesteak Philly style is sure to fill you up.

Mayo (or mayo mixed with a little horseradish), to serve