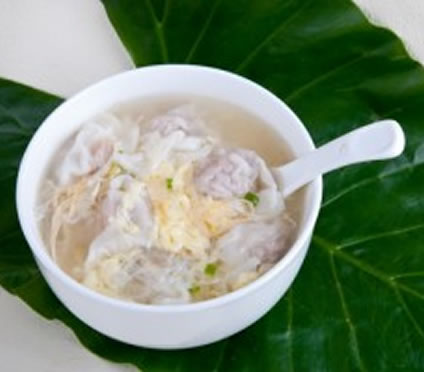 This flavorful chicken wonton soup with cabbage also has green onions, sesame oil and more. If you are looking for an alternative to pork wonton soup recipes you might enjoy this one. You can make the filling up to 2 days in advance if you like.

It is a flavorful chicken wonton soup recipe that makes a healthy dinner or a warming lunch. You could even enjoy it as a snack in the middle of the morning of afternoon, whenever you aren’t ready for a meal but you want something more substantial than just a cup of coffee, which is not going to fill you up too much but still warm your belly and put a smile on your face. 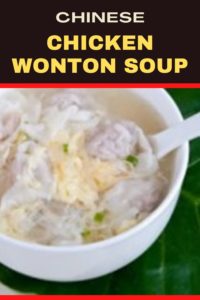 Paired with flavorful Napa cabbage or another variety, as well as green onions and ginger, these wontons have an exciting filling which means you will enjoy eating it as well as putting the recipe together.

It is best to use a low-sodium broth for this chicken wonton soup with cabbage recipe, since the recipe also contains soy sauce and that can be quite salty too.

It is easy enough to add a little extra seasoning to the soup afterwards but there is not much you can do if it is too salty to begin with.

The soft wontons floating in the hot soup give it appeal and texture and anyone you serve this to is sure to love it. Kids like chicken wonton soup as much pork wonton soup too. 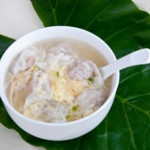 Chicken, cabbage and ginger are among the ingredients in this delicious egg drop soup recipe, and this is a very easy wonton soup to make. Take a look at this recipe and gather your ingredients – you will want to make this!

You can see from the picture how breaking an egg into the soup shortly before serving it adds texture and appeal. Egg drop soup is popular in China but if your soup features both egg and wontons, you know it is going to be hearty and satisfying.

This steamy hot soup offers chicken, sesame and green onion-filled wontons, so whether you are looking for a pick-me-up tonic for a cold or you simply want to make something classically Chinese and tasty, this chicken wonton recipe is sure to please all your senses.

Chicken Wonton Soup with Cabbage Boasts Such a Great Flavor

You might think this is like the tasty soup you had in the last Chinese restaurant you went to, or perhaps you think it tastes even better, and you probably will because the flavors are just fantastic.