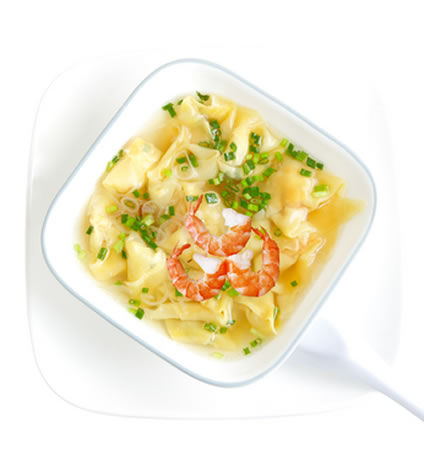 Some people make wonton soup by dropping their filled wontons into their prepared stock and letting them simmer in there but others prefer to cook the wontons in water and then add them to the soup, so as not to make the soup cloudy.

Since you are the cook and the one who is going to be eating the dish, it is totally up to you. You can prepare your cilantro shrimp wonton soup however you prefer.

The first few times I made cilantro shrimp wonton soup I put the wontons directly in the soup mixture and let them cook in there. But then I experimented with cooking them in water and then lifting them into warmed serving bowls using a slotted spoon and ladling the hot soup over the top.

Both ways are good, the second perhaps more authentic. You will just need an extra pot.

This cilantro shrimp wonton soup recipe features shrimp (both whole ones to garnish the soup and minced ones inside the wontons) as well as plenty of sesame oil and cilantro.

The stock for this shrimp wonton soup recipe is made by infusing ginger, cilantro and more in a basic chicken stock and then sieving out the additions. It is important to serve a tasty stock with your wontons. 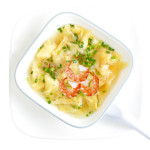 Shrimp and ginger are used to fill these wontons and they are served in an aromatic homemade broth. If you want a really fresh-tasting wonton soup recipe make the soup from scratch for outstanding results. 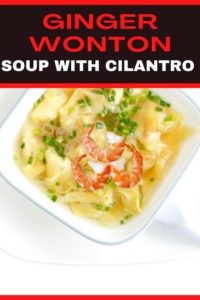 Saving a few of the shrimp to garnish the soup is a great idea. Not only can people identify the flavor of the wontons by seeing the shrimp but it adds a splash of color to this wonderful Chinese dish.

Shrimp are often used (with ground pork too) to make traditional wontons, but they are also good mixed with ginger, cilantro and sesame, and used to fill wonton wrappers.

Wonton soup is a healthy and satisfying dish.

This is the case whether you serve it for lunch, dinner or even a late supper.

Shrimp is a low-fat and flavorful ingredient to choose for your wonton filling.