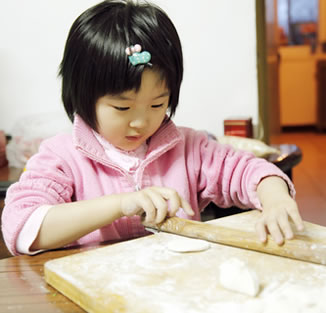 Dumplings in China can be boiled, steamed or pan-fried, crescent-shaped or round, and they may be filled with savory or sweet ingredients. Chinese dumplings are a dim sum favorite. Although dairy isn’t much used in a lot of Asia including China, fusion cooking means there are still cream cheese wonton ideas to try.

Known as jiaozi in China and gyoza in Japan, these crescent-shaped dumplings are filled with meat or vegetables and the flour and dough exterior is thicker than a wonton wrapper. These can be boiled or pan-fried. Gow gee is the Cantonese equivalent of jiaozi and these are deep-fried or steamed instead of being boiled.

You can use wonton wrappers in most gow gee recipes. We might be considering cream cheese wonton ideas now but traditional Chinese wontons wouldn’t include cream cheese. However, if you have tried crab rangoon wontons you will know just how good the combination can be!

Potstickers, also known as Peking ravioli or guotie, are pan-fried and then steamed. These dumplings are flipped before serving so the browned side faces upwards. Har gow, or har gau, are shrimp and bamboo shoot-filled snacks.

The dough for these is shiny and smooth because it’s made with wheat starch. You won’t get the thin, nearly translucent skin if you use wonton wrappers. Shanghai steamed buns are seafood or meat-stuffed dumplings. Tasty and juicy, they are recognizable because the wrapper is gathered into folds before they are steamed.

Siu mai are mild-flavored dumplings made in a basket or cup shape with the filling sticking out of the top. The dumplings are traditionally filled with pork, although you can also get prawn or shrimp varieties. These soft, puffy snacks can be made with round wrappers (jiaozi wrappers) or wonton wrappers cut into rounds.

Although many people refer to these dumplings or dim sum as soft wontons, it is interesting to learn that each has its own name, although you can use wonton skins to make some of them. Knowing some cream cheese wonton ideas means you can come up with your own delicious wontons, or else you can make the traditional kind – it’s up to you!