Try this easy tofu pho, which is a pho and tofu recipe boasting wonderful flavors. Pho is a delicious Vietnamese noodle soup made with rice noodles, broth, meat, seafood or a vegetarian alternative, and herbs. Beef and chicken are the most popular flavors but you can make a great vegetarian pho with tofu. This easy tofu pho is just gorgeous and you’ll love the flavors.

This is a well-loved street food in Vietnam, and the Southern Vietnamese enjoy it for breakfast or lunch, while those in the north of the country have it at any time of the day or evening.

This dish dates back to the early 1900s and refugees introduced it to the rest of the world after the Vietnam War. There is no proof of the cultural influences responsible for this soup or where the word pho comes from, because it is not well documented.

There are Saigon and Hanoi styles, each made with different width noodles, herbs and broth sweetness, and other types of pho such as fusion varieties in experimental restaurants. Try our easy tofu pho recipe if you’re new to pho and don’t want to use meat. I also love making popiah, a kind of Malaysian egg roll, and actually the two go together nicely.

In the late 1920s pho vendors experimented with a cinnamon, star anise, clove and sesame seasoning but this didn’t really take off. Rare beef pho was popular by 1930 and it’s believed chicken pho came out in 1939 (maybe because you couldn’t get beef on Mondays or Fridays during this era).

More than a million people fled North Vietnam for the South in 1954 which is when pho really took off in the South of Vietnam. Various garnishes like bean sprouts, cilantro, lime, hoisin sauce, chili sauce and cinnamon basil were experimented with and soon became incorporated into the standard recipe.

Privatized pho restaurants in the North started making pho noodles from old rice, while street vendors had to use noodles made with imported potato flour.

The following easy tofu pho recipe is made with tofu along with onions, ginger, broth, hoisin sauce and more. There are some optional ingredients in the list, along with some serving suggestions. This makes 4 large portions of easy tofu pho or 6 smaller ones.

This delicious pho soup is made with tofu instead of meat, and also boasts rice noodles, green onions, ginger and more. Make it using homemade broth if possible, for a superior flavor. 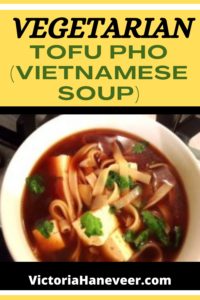