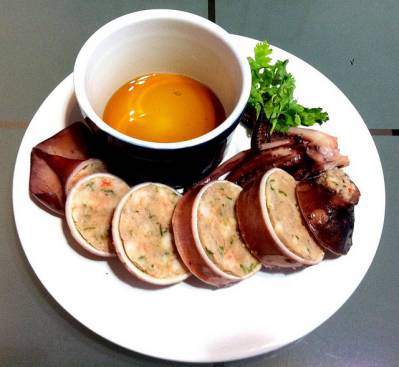 This squid with pistachio recipe is a little unusual, at least quite a bit different than most stuffed squid recipes. Not only does it look delicious but the tangy chili sauce is the perfect partner for the tender seafood. That’s another great reason to prepare this fantastic dish. Squid with pistachio might be hard to imagine but believe me – it’s the stuff of dreams!

The squid is stuffed with a pistachio and lemon infused brown rice which is really filling, and the sauce can be served on the side, like you see in the picture, or you can drizzle it over the plates and arrange the squid slices on top, as you wish. If you want to change this recipe a bit you can use fresh breadcrumbs instead of the rice, since that would also be good with pistachio squid.

As well as the ingredients listed you will need some toothpicks to secure the squid before cooking. Remember to stuff them maximum 2 thirds full so they do not explode during cooking.

Well these squid with pistachio treats do not ‘explode’ exactly but the filling will leak out and look messy, so stick to the 2 thirds rule for the best results and thread a toothpick through the end (or 2 in an X shape) to keep the squid tube closed.

Squid with Pistachio: A Heady Mixture of Ingredients

To be honest, this squid with pistachio is a fusion recipe, borrowing elements from a variety of cuisines. A lot of stuffed squid recipes are Greek or Spanish, since squid is very popular around the Mediterranean, but this one simply picks out a selection of tasty ingredients which harmonize beautifully to offer a sophisticated result. If you’re a fan of calamari, adding pistachios is a great idea!

Forget about sticking to one cuisine and making something authentic to one particular region or country, and instead try something brand new, like this squid with pistachio recipe which is very different to a lot of other recipes for stuffed squid but equally tasty and satisfying. 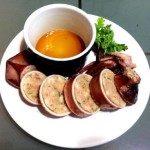 An aromatic recipe featuring a brown rice stuffing for your squid, and a herb-rich flavor. The squid is served with a spicy sauce. This unusual squid with pistachios is really tasty. 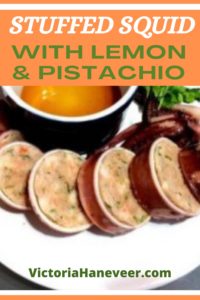 Photo courtesy of Peiyi, on Flikr