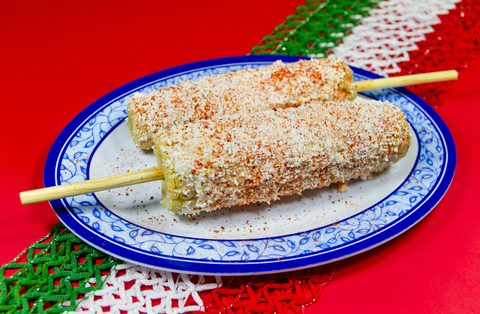 I only discovered Mexican street corn relatively recently, but I really love it! So what is street corn anyway? And how do you make Mexican street corn? Well, this is corn cooked the Mexican way and served with south of the border flavors. An esquite or esquites recipe makes a great side dish or appetizer. The aroma when this is cooking is amazing and your mouth will be watering before you even taste it, I promise!

You can order this dish in plenty of Mexican and Tex Mex restaurants or make easy Mexican street corn yourself in the comfort of your own kitchen. I first tried elotes Mexican street corn at Ambriza, a restaurant in La Centerra, Houston TX. If it’s your first time, you can get it complementary!

Choose which seasonings and cheese to use, as well as whether to serve the corn off the cob (esquites) or on the cob (elotes).

What is Cotija Cheese?

This typical elote or esquite topping is a Mexican dairy product. It’s a salty, crumbly cheese. If you can’t find it or you prefer to use a cheaper option, feta cheese would work too.

What Kind of Corn to Use for Mexican Street Corn

Fresh corn suits this recipe the best, whether you are making a Mexican street corn salad or a hot appetizer or side dish. Use regular yellow sweet corn on the cob or Mexican white corn if you prefer (and if you can find it!)

Elote blanco, or white corn, is the most authentic for this kind of recipe. It’s less sweet and more firm than a regular yellow corn cob. It also has a kind of earthy flavor and is more grain-like in flavor, as well as not as soft as the yellow kind. Try it and you’ll see what I mean. If you can find it at the grocery store that is. Or try a Mexican market if you know of one. I know near me they sell 10-pound bags of frozen white corn which comes out pretty nice.

Elote – sometimes spelled as e lote – recipe success depends on the corn you use, so make sure you pick perfectly fresh corn to give the dish the best chance of success.

Can you use frozen corn? Well you could, and you can thaw it in 10 minutes, but I’d still suggest fresh for the best result.

This version entails cutting the corn kernels off the cob before cooking them over a medium or high heat. You can then serve the finished recipe in a cup, bowl or simply on the side of any south of the border style protein dish.

Prefer your Mexican corn still on the cob? An elote recipe starts with cooking the corn on the cob, before covering it in your favorite toppings and seasonings.

You might be more accustomed to corn on the cob served with salt and melted butter, but once you’ve tried the Mexican version you might just prefer it. 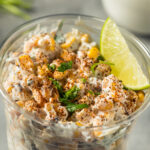 Esquites is a Mexican recipe comprising corn served off the cob along with typical south of the border toppings. Expect an explosion of flavors including sweet, savory, creamy, and spicy, in every mouthful. 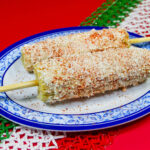 Elote refers to Mexican corn served on the cob. Add a skewer through each one to make it easier to eat and less messy. If you prefer your corn on the cob not off it, this is the recipe for you.

Both are made with corn, either the more savory, firmer white variety or the yellow kind that is best known north of the border.

Why do they call it Mexican street corn?

Because the recipe comes from Mexico and it’s often sold on the street from vendors using carts to prepare the Mexican corn dish.

Are esquites and elotes the same in Mexican street corn?

No. Esquites is corn in a cup while elotes are corn on the cob. They are similar but not identical.

Order this dish from a Mexican food cart in any plaza and you will be asked which you prefer.

What is elote in a cup made of?

This is made with corn kernels removed from the cob and topped with Mexican ingredients.

It’s less messy to eat than corn on the cob but you can always stick a skewer through the cob to make it less messy to eat. However, with a snack this tasty, who cares if it’s a little messy!

What is the difference between elote and corn?

Corn, sweetcorn or sweet corn is an ingredient, while elote is a recipe made from corn.

Recipes vary a lot and some people might prefer a cool Mexican corn salad while others like this snack served piping hot, fresh off the grill grates, with ancho chile powder, regular chili powder, lime wedges or lime zest, and a queso fresco, cotija cheese or creamy sauce to finish it off to perfection.