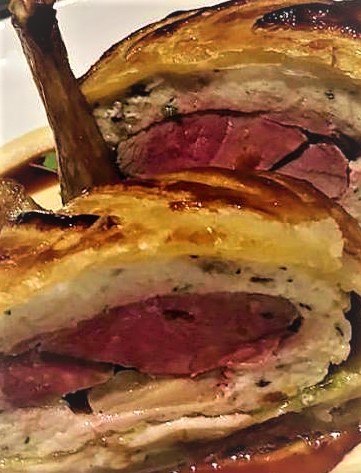 This old-fashioned squab pie recipe, which dates back over a century, combines lamb (or pigeon) with fruit and spices. It is known as Devonshire or Devon squab pie, Gloucester squab pie or sometimes West Country squab pie. You can trace it back to Devon, Cornwall and Gloucestershire, all of which are counties in England.

In Devon, where I happen to be from, this is often served with clotted cream on the side – outside of Devon, usually not. A squab usually refers to a young domestic pigeon but this pie has been made with mutton or lamb for many years.

It is thought either the original pie was made with pigeon (known as squab) or the name perhaps comes from ‘squabble’ which means to have a disagreement about whether to make meat pie or apple pie (since this one contains both).

What’s in a Devon Squab Pie?

This West Country lamb pie contains (as well as the lamb) apples and spices as well as a pastry lid. It is hearty and filling, and therefore perfect comfort food for the cooler seasons.

It can be made as one big pie or you can use separate ramekins to make portion-sized servings. There are various versions of squab pie. In fact, in the US it is actually made with pigeons. Agatha Christie, a famous English crime novelist, created a variation of squab pie with hard-boiled eggs.

Now honestly, a traditional Devon squab pie is one of those ‘at risk’ British classic recipes because only 3% of teenagers surveyed in Britain had ever tasted it. 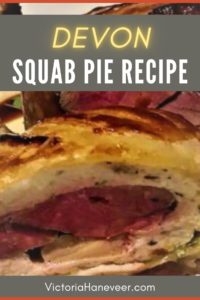 Despite this, if you are interested in historical British or English recipes, Devon squab pie is worth making, because the combination of lamb, apples and spices works really nicely, and the puff pastry crust on top is delicious. Serve this with mashed potatoes and vegetables on the side, to enjoy it to the fullest.

Then in parts minutely nice
Soft and fragrant apples slice
With its dainty flesh, the sheep
Next must swell the luscious heap
Then the onions savory juice
Sprinkle not with hand profuse

In ‘The Squab-Pie. A Devonshire Tale’ which was published in 1827, John Taylor used verse to tell of the captain of a ship who forgot to buy meat for his trip. A boy on the ship goes into town to get a large squab pie from the bakery for a penny, but sadly it was not meant to be his.

Set on a Sunday, the family who had commissioned the pie from the baker, in order to avoid cooking, tried to find the pie but didn’t manage to. John Taylor explains that the moral is that if you believe it is a sin to cook on a Sunday, you should not be still having a big meal by getting a baker to cook for you. Either have that big meal (our squab pie recipe) or don’t have it at all. (We advise that you do!)

This alternative legend surrounding squab pie, along with the other unusual pies of Cornwall, is that they were the reason that the devil never visited Cornwall. In his book ‘Popular Romances of the West of England‘, Robert Hunt explains that the devil crossed the River Tamar to get to Torpoint.

The chapter called ‘The Devil’s Coits etc’ reasons the devil thought the Cornish would put anything in a pie and decided to leave before they took a fancy to ‘devilly pie’ returning to Devon! 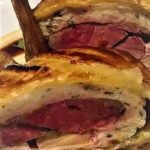 There is some work involved in making this Devon squab pie recipe but the result is worthwhile. This is traditional West Country food at its finest!

Here we combine lamb with fruit, vegetables and spices to make this wonderful pie which is topped with pastry.

Make it in ramekins for an intriguing starter recipe (before fish or chicken) or unusual lunch, or in one big pie dish for sharing.

In the county of Devon, this is traditionally served with clotted cream on the side, but there is also the option of adding some cream to the filling instead.

You can use mutton instead of lamb if you like, or swap the prunes for a handful of raisins.