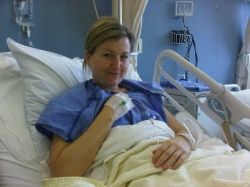 A cheilectomy operation is a surgical procedure which is done to remove bone spurs from the big toe. If you suffer from big toe pain or stiffness, big toe arthritis or hallux rigidus, this operation might help you. You will want to know what to expect from cheilectomy surgery if you or a loved one are going to have this surgery.

This operation will reduce toe stiffness and pain, and allow you a greater range of motion. However, there are a few things to weigh up first.

Your doctor might give you the option of having this surgery, having a different surgery or treating your big toe problem non-surgically, so it is important to make the right choice. There is no such thing as spending too much time researching the different options. Your health is the most important thing you have, so ensure you make the right decision when considering what to expect from cheilectomy.

What to Expect from Chielectomy: Look After Your Feet

Our toes are very important for walking and balance, so we should take good care of them!

Is cheilectomy surgery worth the temporary pain? Is it really the best operation for you? Do you want to know what to expect and how long until you can walk again unaided?

Keep reading and I will do my best to answer those questions about what to expect from chielectomy. I’d like to say here I am not a medical professional. I am simply sharing my own experiences. If you have any medical questions you should speak to your own doctor. But hopefully I can answer some of your questions.

Medical Disclaimer: I’m not a medical professional. The information I am sharing here is to supplement the information your doctor has given you. If you feel your doctor is not doing enough or is unwilling to listen to your concerns, I would strongly encourage you to seek a second opinion. 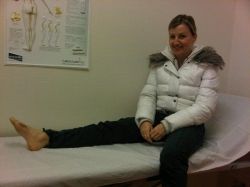 Photo taken just before I had my stitches removed

I started having pain on top of my right foot in summer 2010. I first noticed it when trying on a pair of hiking boots. It felt like the underside of one of the lacing studs was pressing into the top of my big toe base.

Within a few weeks the spot was becoming more tender and the only shoes I could wear were Ugg boots or flip-flops.

Even though it looked normal, something wasn’t right, so I made an appointment to see a doctor.

When I got to the surgery I told him my mother had recently been diagnosed with osteo-arthritis (Hallux Rigidus) and perhaps it was hereditary. The GP told me that at age 34 I was quite young for any kind of arthritis, but he would get a foot x-ray so they could see what they were dealing with.

I got the results back a few days later and the GP told me I did have osteo-arthritis, and the x-ray showed bone spurs growing diagonally upwards around the base of the big toe.

My footwear was pressing down on these bone spurs and that’s where the pain came from. I also had pain at random times (usually when walking but sometimes just while seated or even lying in bed).

The next thing was an appointment at the hospital with a specialist, and I was given 3 options. I learned more about what to expect from cheilectomy surgery.

First, I could go for a cheilectomy, which is when the toe is cut open on top, the bone spurs are shaved off and the foot is sewn back up. I was informed this was usually successful and I would be back walking (without crutches) in a few weeks.

I was also told I might need the procedure every 10 years for the rest of my life, since the bone spurs were likely to return.

The second choice was having big toe fusion treatment, which meant the toe would be permanently straightened.

However, although this would be a permanent solution it is usually recommended for older patients, since you have to wear flat shoes afterwards and you can’t bend your big toe again. Anyone who likes to wear heels on occasion or who does any form of sport or exercise needs to be aware of that.

The third option is non-surgical treatments which include exercises such as stretching and taking painkillers, but I was already sick of wearing nothing but Ugg boots and I wanted this sorted out once and for all. So I went for the cheilectomy.

I had my operation in The Netherlands where I live with my fiance (I’m English though). Now I was understandably nervous on the day of my operation, although everything had been explained to me. I was giving some painkillers and anesthetic and woke up about an hour later to find the operation had been done.

What to Expect from Chielectomy: How It Felt 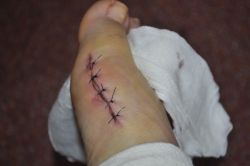 My foot was wrapped in a bandage and it was beginning to ache. I got some more painkillers and was also given 2 different types which I would be taking for the next couple of weeks.

The hospital didn’t have any crutches. Instead we had to go and rent them! Yep, that’s Holland unfortunately.

However they offered to lend me some so I could get downstairs and into the car. That is when I put my foot down on the floor (most people are able to do this) and OUCH!! That was not something I could do.

Not a pretty picture but the scar is nearly invisible now

So they loaned me a wheelchair instead and then I had to shuffle into the car, and wait outside the crutch hire place while Ruud (my boyfriend at the time but husband now) went in and rented some. 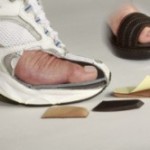 6 out of 10 runners claim it enhances their running performance and anyone with big toe pain or pressure should find this wedge makes a lot of difference. It allows your toe to move and flex naturally while supporting and cushioning it.

You can get the Cluffy Wedge in small medium or large. You can get these online from various retailers but Amazon is the cheapest I’ve found.

What to Expect from Chielectomy: How to Fit the Cluffy Wedge

Buy a pair of Cluffy Wedges (see above) and watch this video before you fit them. I have not used these myself but if you click the Amazon link above you will be able to read the reviews and see how other people got on with them.

Cheilectomy Recovery – It Does Get Better

I managed to hobble/hop around at home for a couple of weeks and I learnt how to use a rubber band to secure a plastic bag around my foot, and other various tricks to make life easier. The pain came and went but on a scale of 1 to 10, 1 being hardly noticeable and 10 being excruciating, I would say the worst I ever had was about a 7, never higher. Some people will have worse pain and others might barely have any.

I was on a pair of crutches for 2 weeks, then a walking stick for another 2. This was December in The Netherlands, and hobbling around on the snow/ice was not easy!

I started to have physiotherapy. In The Netherlands the doctor will tell you to find your own physio, so we picked one which was within hobbling distance for me (I can’t drive).

This was one of the worst mistakes I made. This physio was a “new age physiotherapist” and although I am interested in all things New Age (tarot cards, reiki, crystal healing and the like) when it comes to my health I usually like to try the standard treatments first and either complement that with New Age ones or just try the New Age ones if the traditional doesn’t work.

Anyway I had several treatments there, then I stopped going. The physiotherapist was trying to ‘clear my energies’ and rub strange-smelling ointments into my calf and foot.

My toe remained painful and stiff. A while later I found a different physio and this guy was way better. He expressed surprise at how stiff my toe was and began a rigorous massage to get it moving again.

He also gave me exercises to do at home. After a few treatments the toe was much more flexible and less sore. I wished I’d found this physiotherapist before the other one though! Knowing what to expect from cheilectomy also entails knowing just how important the right physiotherapy actually is.

I had the stitches removed after 6 weeks (if I remember correctly) and that was painful! The nurse even left 1/2 stitch in which I managed to fish out later at home using a pair of tweezers!

What to expect from cheilectomy after 2 years. It’s been nearly 2 years since the operation and I can say my toe is about 90% back to normal. I get the occasional twinge and it’s sore the following day if I wear high heels (I wear them 3 times a month if that).

But yes I can wear high heels again if I like! And I can bend the toe nearly (not quite) as much as the other one. I can jog, I can run, I can do Tai chi and yoga, and I can walk for an hour or 2 without even thinking about it!

What to expect from chielectomy after 10 years. Actually, closer to 11 years. Even better!

Despite being informed I might need the surgery repeated after 5 to 10 years, that doesn’t seem to be the case with me. I am briefly back in Holland (Covid reasons) and the cold climate means I do get the occasional pain in my toe but honestly if I’m indoors or it’s warm I barely notice anything.

I had an X-ray at the hospital when it did start bugging me again (coincidentally – or not – when autumn arrived with the cold wind!) They said there is ‘slight’ evidence of arthritis. The doctor afterwards said they can repeat the surgery if I am having discomfort or pain.

I’m really not though, so I will just see how it develops. There is a change I might need to repeat the surgery again at some point but that isn’t definite. 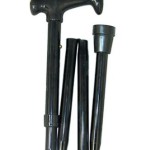 You are going to need one of these for sure. This cane folds up to fit in a carry-on bag or purse, so you can stow it safely while not in use.

This is a very similar model to my cane and it is really handy! Knowing what to expect from chielectomy surgery means being prepared. You will need some kind of cane, even if just for several weeks.

Once you no longer need the crutches you can progress to a walking stick or walking cane, just to offer a bit more stability and take the pressure off your toe while it is still in the early stages of healing.

Your toe can take up to a year to feel good again (or in my case 18 months but that was after disastrous physiotherapy) but it might still ache from time to time, so having one of these fold-up canes is a wonderful idea.

What to Expect from Cheilectomy: Gel Big Toe Cap 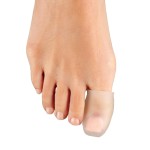 Slip this thermoplastic gel cap over your toe for pain relief.

Use this for hammertoes, deformed nails, corns, ingrown toenails, to keep your socks hole-free, or to keep your toes comfortable while jogging. Use the big cap for your big toe or the small caps for smaller toes.

Now you now what the expect from chielectomy, or at least have some idea of how it’s going to be, hopefully you feel better about the whole thing. If you have any questions feel free to drop me a line. I’m only too happy to reply!