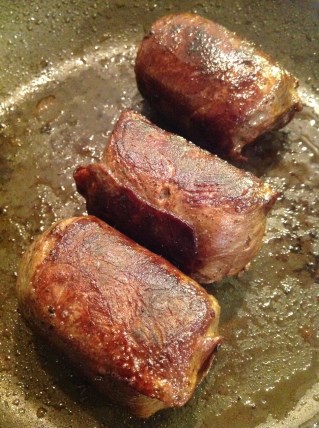 Slavink is a Dutch meat recipe you will spot in grocery stores in the Netherlands, nestled in the pork area. These can best be described as a rectangular meatball wrapped in bacon. Go back in history and you will find a Dutch slavink recipe was originally a small songbird wrapped in bacon.

In the south of Europe you can still find such a dish despite many people trying to outlaw the dish, but the modern Dutch version used ground beef and/or pork instead. In fact many of them use a half beef/half pork mixture to create a Dutch slavink recipe which is popular locally.

Butchers in the Netherlands make their own slavinken, which is the Dutch plural of slavink. We suggest you make a batch of them too because they freeze well. If you want to do this with your Dutch slavink recipe , wrap them individually in plastic wrap and then put them all in one large Ziploc bag. Let them thaw overnight or for at least 12 hours before using.

The size you make the slavinken is up to you. Some people make them big, like one per serving, while others prefer smaller ones – several per serving. Because these Dutch meatballs are wrapped in bacon which releases fat in the pan, you will not need to add much, if any fat to the pan. Serve them with mashed potatoes, mushrooms and onion, for a traditional Dutch recipe.

which are slavinken without the bacon wrapping, ‘blinde vink’ (blind finch) which comprises a ground beef filling and wafer-thin beef slices instead of bacon, or ‘kalfsvink’ where the beef and bacon are swapped for ground veal and wafer-thin veal slices. Now you can see how it’s possible to get creative with a Dutch slavink recipe.

You can also tweak the original Dutch slavinken recipe, using any kind of ground meat or even seafood. Try hare, pike, tuna, lamb, or salmon.

Wrap them with prosciutto, smoked salmon, eggplant, or zucchini, and use any herbs or seasonings you want. These of course are not traditionally Dutch but it’s fun to experiment in the kitchen!

If you want to try more Dutch delicacies, I recommend trying my stamppot with kale recipe, especially if you want something hearty! 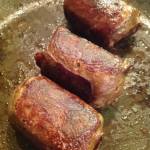 A seasoned ground pork filling is enclosed in bacon. These bacon wrapped meatballs are then pan-fried and served with a quick and easy homemade gravy, for an authentic Dutch dinner.