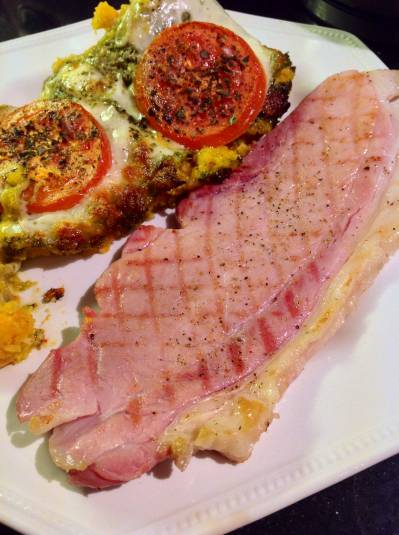 Gammon steak is one of the most delicious treats you can have for your dinner. Learn how to cook gammon steak and you will be able to make a delicious meal. If you have not enjoyed this juicy treat in a while you might be in the mood for it tonight, in which case read on and find out how to prepare it like a pro for juicy and succulent results.

Gammon steaks cook quickly and some people accidentally overcook it, which you will want to avoid.

What is Gammon Steak Anyway?

If you are in the UK you will probably already know what gammon is, but our friends across the Pond might not! Gammon comes from an Old Northern French word ‘gambe’ which means the hind leg. What is gammon called in America? Well, as far as I can tell, it’s known as Virginia ham, but I don’t know that’s an identical piece of meat as I haven’t seen or tried it there.

Gammon steak is the hind leg of a pig (the ham) after it is boned and rolled or cut into individual steaks. I’ve found similar types of ham in the US but nothing exactly like the British gammon steak.

You usually get it vacuum-packed and it typically keeps for months because the brining process and vacuum packing preserve it and keep the flavor intact. I have some in the refrigerator right now which says Use by February 28th, 2014 which at the time of writing was a month away!

Where Does Gammon Steak Come From? 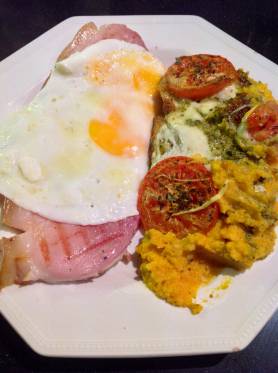 Gammon meat comes from a carcass after brining treatment while ham comes from the carcass before, although both gammon steak and ham are cured meats and look and taste very similar.

It can be boiled, roasted, baked or grilled, although I usually cook it in a very hot griddle on the stove. The key to successfully cooking gammon steak is keeping the cooking time short.

Although some cooking times take longer than others (baking in a low oven, for example, when compared to cooking over hot coals) as soon as that meat is light pink it’s done. And then it’s time to stop cooking!

It’s done when it’s somewhere between pale and mid-pink and the edges are starting to brown. If you’re using a griddle pan you’ll clearly see the griddle marks on the meat.

How Do You Know When Gammon Steak is Cooked?

You will see the gammon steak is a deep pink when you start cooking then it goes pale after a couple minutes. That lighter pink color means it is done!

You can eat the whole gammon steak if you wish or trim off the fat and eat the rest. There are various recipes for gammon steak but today I want to show you how to griddle-cook it because that is the simplest way.

How long does it take to fry gammon? Well it depends on the thickness. If you go by when it changes from dark to light pink though, that’s a reliable way of determining when gammon steak is cooked through.

Why is Gammon So Salty?

This is normal. Lots of salt is used during processing and you can taste it in the finished ham.

How to Cook Gammon Steak: What You Need

You will need a griddle pan which is a heavy ridged pan you put on the stove. Heat the pan and get it nice and hot (don’t add any oil or fat to it), the hotter the better.

I like this 11-inch griddle pan. It took a while to get used to washing it in the sink. It’s cast iron so you aren’t going to want to put it in the dishwasher. Well, you might want to, but it will get rust on it. Wash it with hot soapy water after use and wipe dry with a towel.

Keep the seasonings simple (I just use a little oil to seal in the juices and give a nonstick effect and a little black pepper).

If you want to serve this with pineapple have it ready. If you prefer a fried egg, start cooking that when you start cooking the gammon steak and of course keep an eye on each! 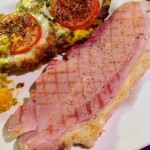 Gammon steak comes from the brined leg of a pig, and this ham-like meat is delicious when cooked fast and hot. Serve it with your choice of a fried egg or pineapple for a traditional British dinner. 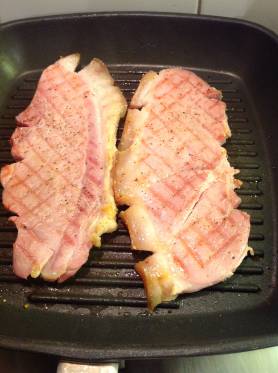 Traditional side dishes include a fried egg or a pineapple ring on top, and you can serve anything else you like such as mashed potato, broccoli, green beans or even some salad.

I like the pineapple but my husband prefers a fried egg (well and a pineapple ring too!) Those are certainly the most common gammon steak sides that come with this dish in the UK anyway.

In the photo you can see I made sweet potato mash with some tomatoes on top. My husband is diabetic so he has to have ‘good’ carbs is why!

How to Cook Gammon Steak: What Else…?

As for condiments, something sweet like redcurrant jelly would go well with the gammon steak. Or else you might prefer mustard or even mayonnaise.

How to Cook Gammon Steak: Why Snip the Fat?

Before you cook the gammon steak, snip into the fat a few times (see the picture on the right) because if you don’t, the meat will curl up when you cook it and therefore not cook as evenly.

Just a few snips will do the trick. I cooked this a few times before I discovered the snipping trick actually, but I always use it now! Some people will eat the fat while others just leave it (I fall into the latter camp, I’m not a big lover of fat unless it’s that crispy orange-colored fat on bacon and I can’t resist that). Now you know how to cook gammon steak why not have some for dinner?