Last night I decided to make seafood so I grabbed some raw squid (calamari) tubes and also 2 cooked octopus legs. I had an idea of how to cook them but wasn’t sure how to reheat the octopus without it going tough. I really wanted an octopus and squid stir fry though, so I went ahead with it.

On the package it said to give it a couple of minutes in the microwave but I wasn’t keen on that idea. Instead I prepared a stir-fry type dish with the squid, then added the octopus at the end and just stirred it into the rest of the mixture until it was warmed through. It came out really well and octopus and squid stir fry is something I want to make again.

How to Reheat Octopus

The key here is reheating it gently so it doesn’t toughen. That means you should get it warm rather than piping hot else you risk that meat toughening up, and let’s face it, nobody wants chewy seafood. Of course, the octopus can also be served cold, as part of a salad perhaps.

The best way that I’ve found is to slice the legs and cook them briefly in oil and melted butter, adding some paprika or oregano and lemon juice if liked. It takes literally 15 seconds to warm up and if it is served in a hot dish, the heat from the other ingredients will keep it warm. You could try the microwave method (2 minutes at ½ power) if you want, but I haven’t tested that.

In the following recipe we are cooking our aromatics (onion, bell pepper and garlic) in oil and butter, then adding the squid and the octopus, along with lemon, oregano or parsley, and some salt and black pepper. Then you can serve the dish immediately.

Prepare the seafood and vegetables before you begin cooking, since this really doesn’t take long to cook, and you don’t want the seafood in there too long. I like to add garlic, lemon and oregano for a Greek flair but you could try parsley instead, or paprika and chili flakes, or go for other aromatics or seasonings.

You can use small or large squid tubes for this octopus and squid stir fry. Mine were quite small (about 3 inches or 7 1/2 cm) because I tend to save the larger ones for making a stuffed squid recipe but you can use any size you have. Just ensure they’re cleaned and if you have thawed them, blot them with paper towels to get all the moisture off. This recipe is gluten free, low carb and paleo friendly. 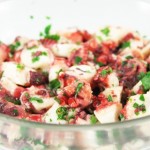 Octopus and squid are briefly stir-fried to perfection. We are adding oregano, garlic and lemon for a Greek flair. This dish is incredibly easy and takes just few minutes to prepare from start to finish. 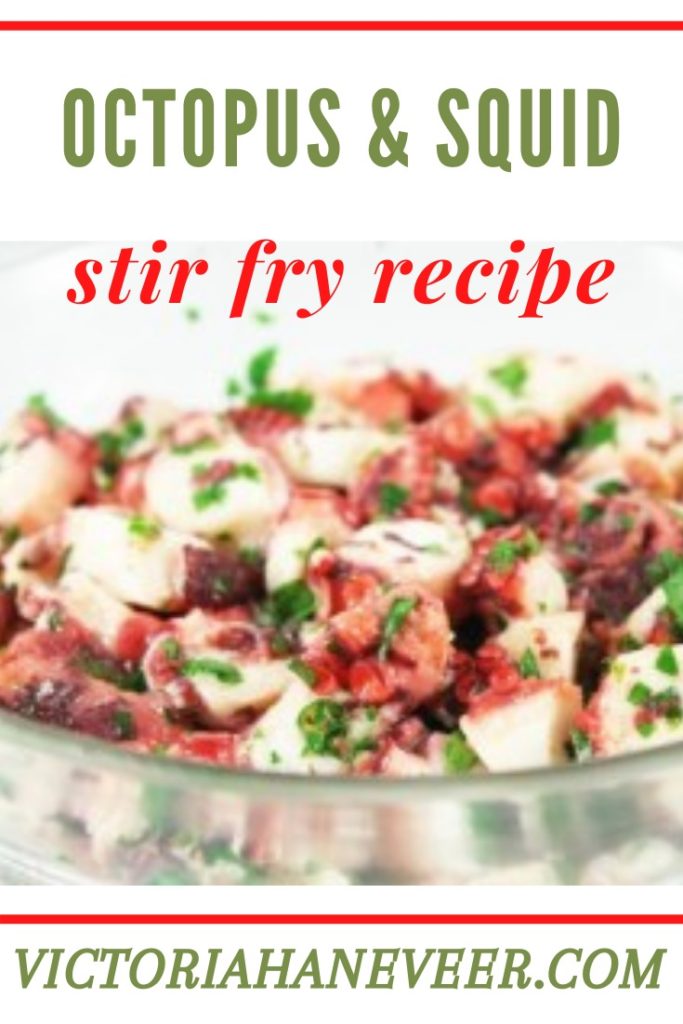