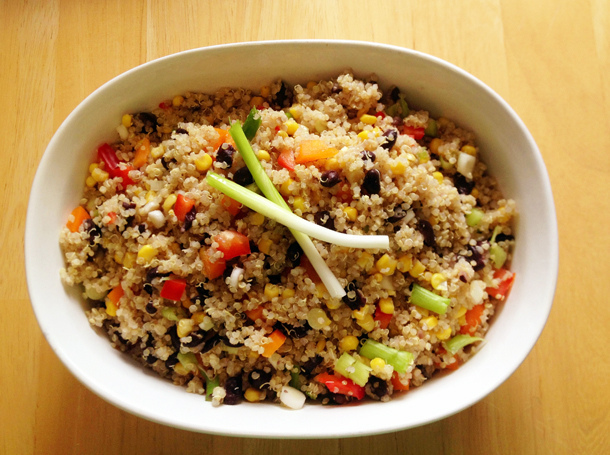 Once you know how to cook quinoa on the stove, you’ll want to use quinoa more often instead of grains like rice.

Quinoa is quickly becoming a popular food in America and throughout the world. The fast spread of this low-fat superfood grain has led to people wondering how to cook it at home. Chances are you’ve probably eaten it at a restaurant or at a friend’s house.

The good news is that quinoa (pronounced KEEN-wah) is really easy to cook at home. It’s certainly no more difficult to cook than rice or buckwheat, which is good news for all of you that want a taste of this superfood without having to pay the high prices restaurants usually charge for it. 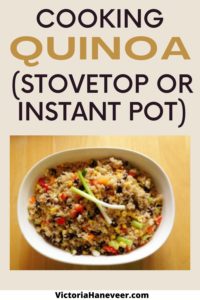 The first thing that you need to do is soak your quinoa in a large bowl of water for 15 minutes. The outside coating of quinoa has a bitter substance called saponin. This is the plant’s way of ensuring that birds don’t steal its precious nutrients.

The bitter taste makes birds think twice about chowing down on it. Drain and rinse the quinoa using a fine mesh strainer after it has been soaked. You’ll want to do this once or twice for a minute or two. This is the final process of getting rid of the saponins.

How Long to Cook Quinoa

It depends if you’re boiling it or Instant Pot cooking it. First, the stovetop method.

Place the quinoa in a pot with a 1:1 ratio of water. It’s important that you keep this ratio of water. Most people mistakenly add a 1:2 ratio of water to quinoa like they would other grains. This will make your quinoa soggy and wet.

Remove the pot from the heat after all of the water has been absorbed by the quinoa. Let the quinoa sit in the cover pot for 5 minutes to continue steaming.

After it is done steaming, fluff it with a fork, just like you would any other grain you cook. The only thing left to do is eat it! See, it’s worth learning how to cook quinoa on the stove because there isn’t much to it once you know how.

How to Cook Quinoa in the Instant Pot

Got an Instant Pot? You can easily cook your quinoa in there. Add a cup of quinoa and 1 1/2 cups of water (or broth) to the Instant Pot. That’s right, the 1:1 method doesn’t apply here! So for every measure of quinoa you should add 1 1/2 times that same volume of liquid.

Let it pressure cook on high for 3 minutes after it’s finished pressurizing and then let the pressure release for 10 minutes. The quinoa should be perfectly cooked.

How to Enjoy Quinoa

You can eat quinoa plain, or you can jazz it up with all kinds of recipes. The truth is, the sky is the limit when it comes to quinoa.

It’s basically like any other grain in that respect. Just think of all the things that you can do with rice. Add a little creativity and you’ll be able to come up with similar ideas with quinoa.

The most important thing to remember when cooking quinoa is to keep an eye on the water. Use equal parts of water and quinoa.

The other thing to remember is to cook it on low heat after turning the temperature down.

Cooking quinoa only takes a few times to perfect. Don’t be surprised if your first or second batch doesn’t turn out exactly the way you wanted it to. Your first batch of rice probably wasn’t perfect either and it’s something to always keep in mind. It’s not difficult to cook quinoa at home and everyone should try it. It’s a great-tasting grain that will have a huge impact on your health.

Add a hearty flair by cooking your quinoa in bouillon instead of water, then stir in some shredded cooked beef  or chicken and some chopped cooked broccoli. This is a great reason to learn how to cook quinoa on the stove because you can rustle it up quick and easy.

Another idea is adding a South of the border flavor by stirring tomatoes, green onion, corn kernels and a pinch of chili powder (some cumin too maybe) into the cooked quinoa with some lime juice as well. This would be great served alongside grilled chicken.

Would you prefer a cold dish? In that case, allow the cooked quinoa to cool and then add your favorite salad ingredients as well as a spoonful of mayonnaise or a splash of extra-virgin olive oil and one of balsamic or red wine vinegar, or even lemon juice.

As for the other ingredients, little cubes of feta or mozzarella, chopped sun-dried tomatoes, raisins, cashews, celery, olives, cooked pieces of meat or seafood, and chopped beets are all good.

Use your imagination to come up with even more easy quinoa recipes and you will be glad you learnt how to cook quinoa on the stove.

How Much Quinoa Per Person

It’s easiest just to eyeball the amounts. Quinoa triples in size during cooking, so you can use this to figure out how much to make.