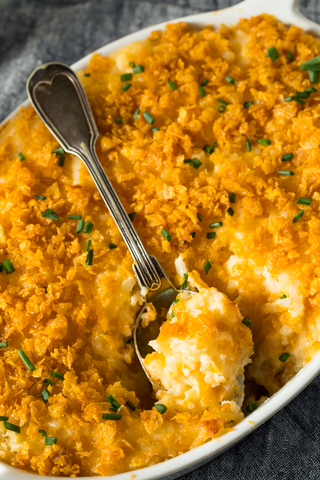 Or how about cheesy cornflake potatoes to go with your dinner tonight? There are no hard and fast rules, which is why there are so many different funeral potatoes recipe ideas to choose from.

What is in Funeral Potatoes?

This potato casserole often boasts dairy in the form of sour cream and melted cheese. Some recipes for funeral potatoes include onions, garlic, corn flakes and more.

What is the History of Funeral Potatoes?

It’s not clear where the name of this cheesy potato casserole comes from. However, some people think it originated with the Relief Society, a women’s Christian organization. The women in the organization had various responsibilities, including preparing food for the recently bereaved.

The history of this dish is also interlinked with the Mormons. So are funeral potatoes a Mormon thing? Well, many Mormons grew up with this dish and not only at funerals. This popular side dish often made an appearance at everything from Thanksgiving, potlucks and fall/winter dinners.

Can You Make This Dish Ahead?

You can prepare this dish in advance but don’t add any cornflake topping or butter else it will go soft. If you want to freeze this cheesy potato casserole, make it until where you add the potatoes to the baking dish. Then you can cover with foil and freeze. Use within 3 months.

How to Make Funeral Potatoes for a Crowd

This is a recipe that’s easy enough to double or triple. So if you want to make a big batch, get some disposable 13 x 9-inch baking pans unless you already have some metal ones.

Disposable 13 x 9 pans are cheap and you don’t have to collect them up after the party (or funeral!) 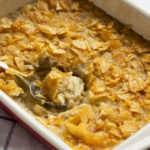 How Many Potatoes in a Pound? 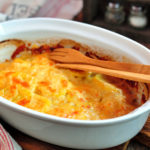 You don’t have to use corn flakes if you don’t want to. A potato casserole with corn flakes is always good but this alternative corn flake-free recipe is also delicious.

This is a simple version of funeral potatoes without corn flakes so add your own touches as you see fit to customize it.

How Long Can Funeral Potatoes Sit Out?

I wouldn’t leave them out for more than a couple of hours to be on the safe side. Don’t worry – these easy cheesy potatoes are so delicious I’m sure they’ll be all gone after an hour tops!

How Can I Make My Cheesy Potatoes Unique?

Try adding cooked chicken to the mix before baking. I bet funeral potatoes with chicken would be amazing.

Oh and bacon goes well too unless you’re looking for a vegetarian recipe. Since this is a side dish, you don’t have to add a protein.

You can also add sliced tomatoes on top for a splash of color or sprinkle on some snipped fresh chives before serving. 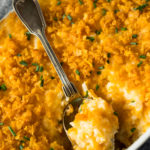 Although hash browns are a quick and easy alternative, I find the best funeral potatoes recipe is one with real potatoes.

Can You Make Keto Funeral Potatoes?

If you are wondering whether keto funeral potatoes are a thing, you have a couple of options. Replace the potatoes (or hash browns) with turnip or cauliflower to cut down on carbs and you can be heavier handed with the cheese, sour cream, butter, and so on.

I haven’t done this myself – I’d rather have a small portion of the real thing, but I don’t mind turnip so it could work!

Another option is to use Carisma potatoes which are naturally low carb, although sadly these are difficult to find outside of Australia these days and they seem to be gone from shelves in Europe too.

It’s handy to be able to make these in a crockpot since you can bring the crockpot with you to wherever the gathering will be.

Simply dump all the ingredients except a cup of cheese in the slow cooker (or Instant Pot) then cook on low for 5 to 6 hours or high for 3 to 4 hours, or until the potatoes are tender. You can check them using a fork.

Take the lid off and sprinkle the last cup of cheese on top then put the lid back on. Cook for 10 minutes or until the cheese has melted. For a change, try cream of celery or cream of bacon soup rather than the chicken.